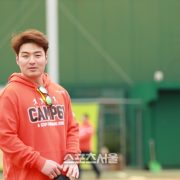 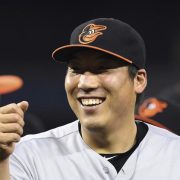 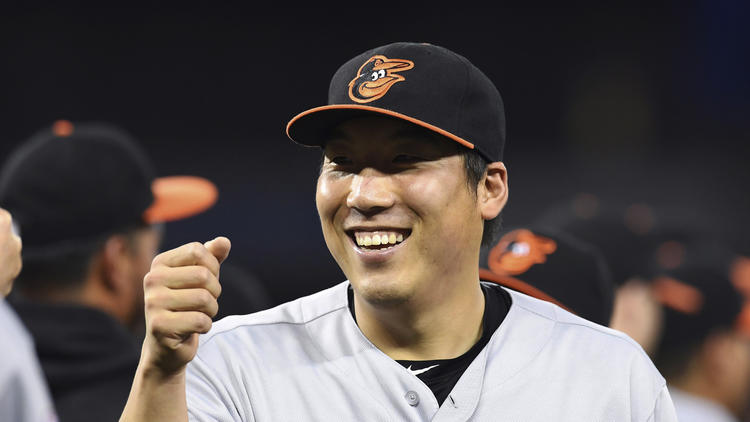 With the 2016 season finished, there’s no better time than the present to take stock of the Orioles’ organizational depth at every position around the diamond.

Over the next few weeks, we’ll break down every position individually and separate the players all through the system into three categories: who was the man there this year, who else was in the picture, and who is working through the minors to join them. We end the week, and our trip around the infield, with third base. Manny Machado means things are going splendidly for the Orioles at that spot.

The man: The Orioles have the joy of running out 24-year-old star Manny Machado at third base, and seemingly every time they do, he does something that solidifies his status as one of the game’s best young players.

Machado, who finished fourth in the American League MVP voting a season ago, put forth an effort worth at least that this year by batting .294/.343/.533 with a career-high 37 home runs and 96 RBIs. He made the All-Star team for the third time in his four full seasons, and provided one of the more exciting moments of the year when he slugged Kansas City Royals pitcher Yordano Ventura after a hit-by-pitch in a June game at Camden Yards.

There were special moments provided inside the structure of the game, too. Machado homered in the first, second, and third inning on Aug. 7 in Chicago to become just the second player in major league history to do that. He swatted three grand slams, and while he sometimes left a little to be desired with his situational hitting, it’s nitpicking to find much wrong with what Machado did this season.

Even if he didn’t hit so well, Machado would be worth having around because of what he does defensively. Machado is widely considered a top-tier defensive third baseman, and he showed just how precocious his talent is by shifting to shortstop when J.J. Hardy fractured his foot in May. He shifted positions seamlessly, and though he’s not the elite defender at short that he has proven to be at third, that seven-week cameo solidified just how valuable Machado is in many senses.

The alternatives: When Machado went over to shortstop in Hardy’s absence, the Orioles rotated through three players at third base — Ryan Flaherty, Paul Janish and Pedro Alvarez.

Flaherty played the most of those three while Machado was at short, batting .225 with a .650 OPS and three home runs in that time. Janish made nine starts at third base. Alvarez was a third baseman for all of his career before defensive issues prompted the Pittsburgh Pirates to move him to first base in 2015. He appeared in 12 games at third base for the Orioles, starting six.

The future: Any future that’s not centered around Machado at third base is a worst-case scenario for the Orioles, and that’s no knock on the players below him on the depth chart. The biggest name among them is 19-year-old Jomar Reyes, who spent the season at High-A Frederick this year.

Reyes is a big, young man with big-time raw power, but through three professional seasons he hasn’t been able to harness it in game situations. He hit .228 with a .607 OPS and 10 home runs in 126 games for the Keys, and is a candidate to repeat the level. He also made 25 errors at third base, and while he entered the season trimmed down, he might ultimately be too big to handle the position full-time.

Ahead of Reyes is Drew Dosch, an interesting player who took a major step forward in 2016. Dosch would have gone much higher than the seventh round in 2013 had he not torn his ACL shortly before the draft, but the Orioles still might have gotten a bit of a bargain in selecting him there.

Dosch shot through the system in 2014 and 2015, but scuffled last year in Double-A and was batting .226 at the All-Star break this year. He developed an all-fields hitting approach and had a 306 average with an .878 OPS the rest of the way, ending his season with a .261 average.

The skinny: Even without much behind him, Machado’s mere presence means third base is one of the Orioles’ strongest positions both now and going forward. He’s a perennial MVP candidate entering the prime of his career, and the expectation is he’s only going to get better.

The Orioles still have two more years of control on Machado’s contract, and while that seems like a small number, having a player like him trumps anything you could get for him when you’re still trying to contend, as the Orioles are. 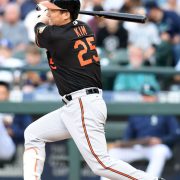 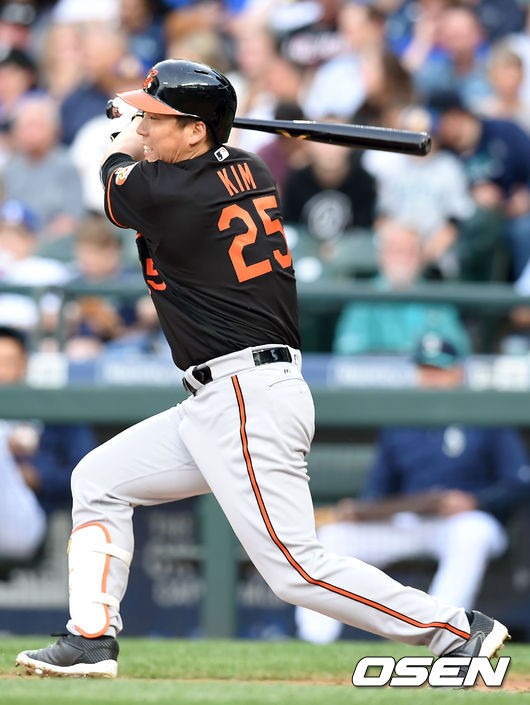 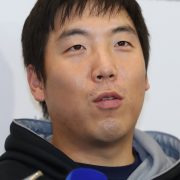 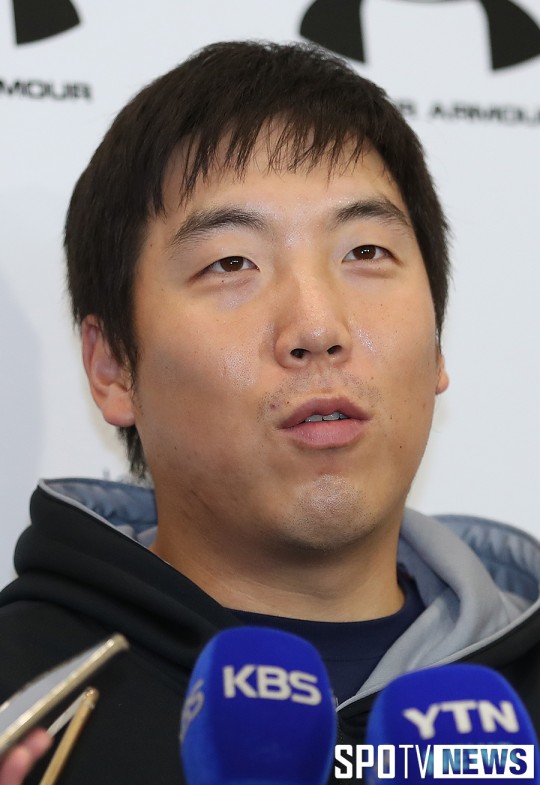 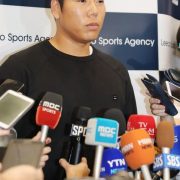 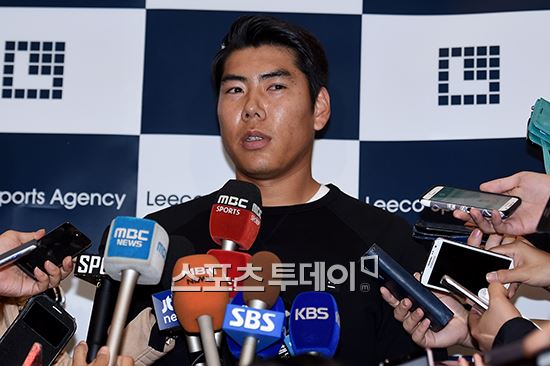 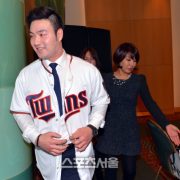 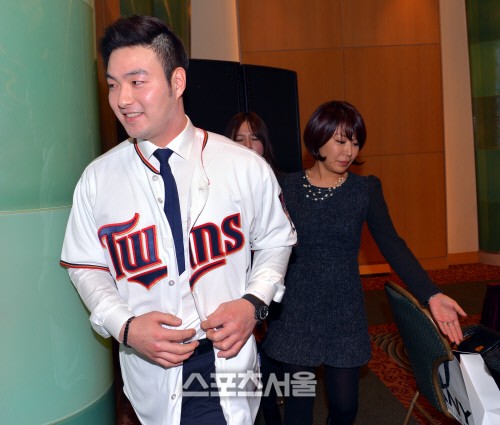 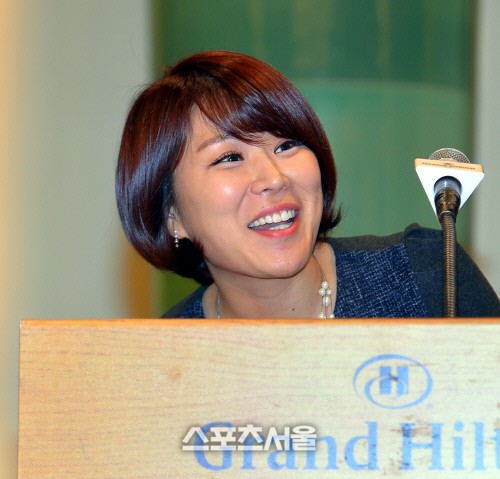 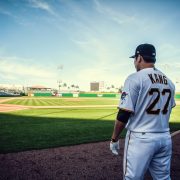 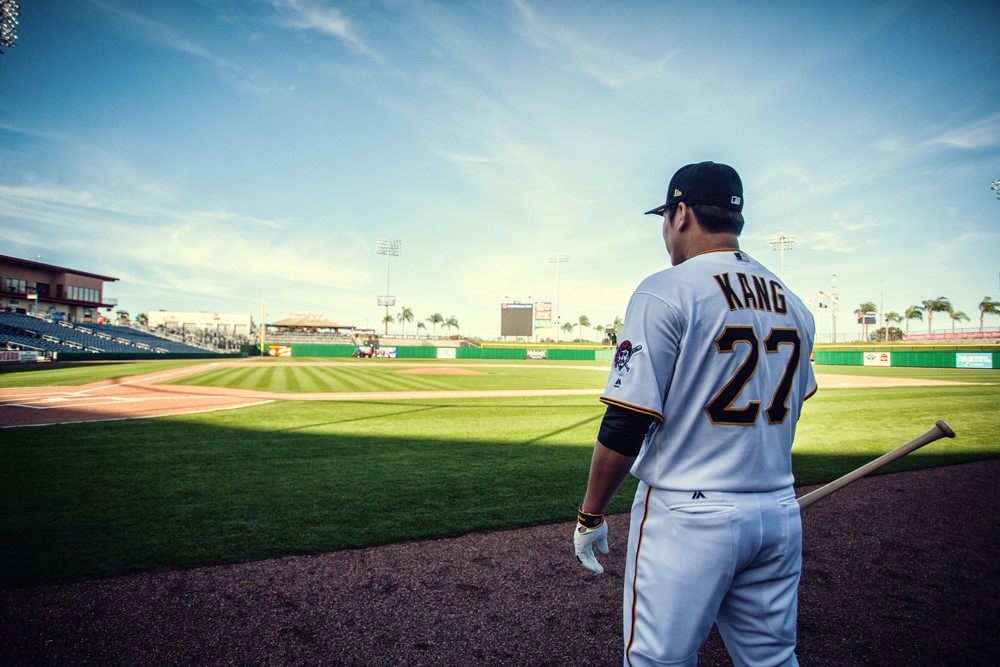 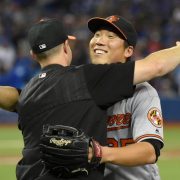 TORONTO — Hyun Soo Kim sauntered into the Baltimore Orioles clubhouse Monday afternoon, looked up, stared at the nameplate, and the emotions started to hit him.

It was six months ago, when introduced at the Orioles’ season-opener, he was lustily booed at Camden Yards, with their fans showing disgust he was taking a spot on the roster.

“It seemed like a long time ago,’’ Kim said, through his interpreter. “A lot of things have changed.’’

Here he is today, just as responsible as anyone in this star-studded clubhouse that the Orioles are playing Tuesday night (8:08, TBS) in the American League wild card game against the Toronto Blue Jays.

“We’re not here without him,’’ Orioles All-Star center fielder Adam Jones told USA TODAY Sports. “He not only hit the biggest home run of our season, but it was arguably the biggest hit of the season.’’

It was the hit heard from Baltimore to South Korea, a one-out, two-strike, ninth inning homer a week ago off Blue Jays closer Roberto Osuna. It not only won the game, but saved the Orioles’ season, preventing them from dropping three games back in the wild-card race to the Blue Jays.

“That changed a lot of things,’’ Blue Jays manager John Gibbons said. “We win that game, I’m not sure they recover. We lost that game, and it took us awhile to recover. We had a chance to put them away, and didn’t.’’

Now, just a week later, Kim is back in the same country, the same stadium, and in the same uniform, but with a new persona.

What a difference a single swing of the bat – capping a nine-pitch at-bat – can make.

“Oh, that was big!’’ said Orioles right-hander Chris Tillman, who will start the wild-card game. “That was big. I think that turned the tables there in that series. It was not looking too good before that game, and for Kim to do it….

Perhaps, no one in this entire postseason has more of an appreciation than Kim for even being on a playoff roster. This is a guy who was unwanted in spring training. Scolded by the front office. Scorned by the fans. It was only his teammates who kept up his spirits, loving his personality, and mesmerized by his inner strength.

It would have been easy for Kim to break down this spring, call it quits, return to Korea, never to be heard from again in this country.

When he arrived to the United States, and headed to the Orioles’ spring-training camp in Sarasota, Fla., the Orioles couldn’t believe what they were seeing. He was out of shape. And he stunk. He hit just .178 in spring training without a single extra-base hit.

“The language barrier was a good thing for him,’’ Jones said. “Booing and cheering is universal, but when people were saying nasty things, it could be ignored, just because of the fact he didn’t understand them.’’

The Orioles were so alarmed that they approached Kim toward the end of March, and told him he needed to open the season in the minor leagues.

“He didn’t look like the same player we signed,’’ Duquette said. “There are big adjustments that needed to be made. From our perspective, we said, ‘Go to the minors, get some at-bats, get comfortable, get yourself in shape.’’

Kim, 28, who came into camp weighing 247 pounds, had a clause in his two-year, $14 million contract that prevented him from being sent to the minors without his consent. So he was exercising his negotiated right.

It was the Orioles’ right to release him if they chose, but he was wasn’t about to play in the minors.

“He just said, ‘I didn’t come here to play in the minors,’’’ Duquette said.

The dispute soon became public, and when he arrived for that opening-day ceremony, the fans acted as if Manny Machado had just been traded to the Yankees.

Kim may barely speak English, but he certainly understood the sound of boos.

Still, he refused to succumb to the outside pressure. You see, he couldn’t give up. He had a country counting on him. Korean players watching and praying for his success. He was their guiding hope, just like pitching star Chan Ho Park and Pittsburgh Pirates infielder Jung Ho Kang before him.

He was the Cal Ripken of the Korean Baseball Organization League for the Doosan Bears, playing in virtually every game for 10 years. He hit .318 with a .406 on-base percentage in 10 seasons in South Korea, with more walks than strikeouts, including 28 homers, 121 RBI and 103 runs the final season. He came to camp expecting to be the Orioles’ everyday left fielder, only to wonder if he’d walk in one day and find himself unemployed.

“It’s kind of hard to lay it out in words,’’ Kim said, through interpreter Danny Lee. “Things just weren’t going in the right order, the right direction. He was the only one that can overcome this.

“He was not going to ask for any help.’’

Kim, who opened the season on the bench, was used sparingly. A start here. A pinch-hit there, and just 15 at-bats total in April. Yet, as the season started progressing, Kim started showing why the Orioles fell in love with him in the first place. He showed that plate discipline. The bat speed. The ability to adjust.

“Then it was like, ‘Whoa, this guy can actually play,’ ’’ Jones said. “Look at him now. He just maintained. And his professionalism showed more than I ever imagined.

Close the Orioles’ clubhouse doors, and he’ll have his teammates rolling. He can impersonate anybody and anyone. Yes, much to his chagrin, even Orioles manager Buck Showalter caught Kim’s impersonation of him a few weeks ago, and couldn’t stop laughing.

“Unfortunately,’’ Showalter said, “it was very accurate. I’ll get him. I’ll get him back. …He’s had a great support group with his teammates. They love him.’’

Says Tillman: “He’s a guy that we all kind of get on all the time. He’s fun to be around, man. He shows up with a smile and leaves with a smile. Win, lose, rain or shine, he’s always got a smile on his face.’’

Only now, with the playoffs looming, and Kim emerging as that dangerous left-handed bat, hitting.302 with a .382 on-base percentage, that smile has never been bigger, or brighter.

Finally, he knows that he belongs.

“I always felt part of this team,’’ Kim said, “because my teammates were so welcoming and nice, but now, I’m just happy I can contribute to this team. 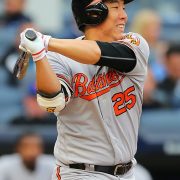 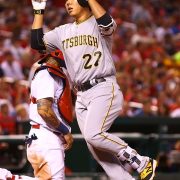 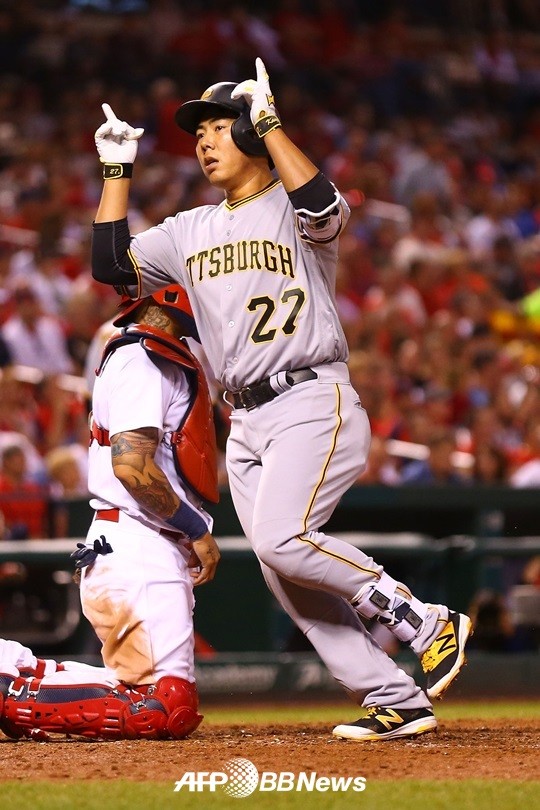 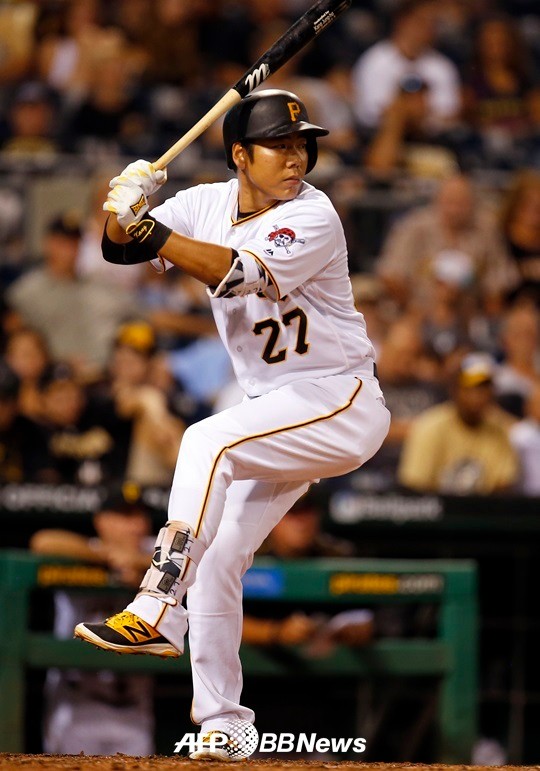 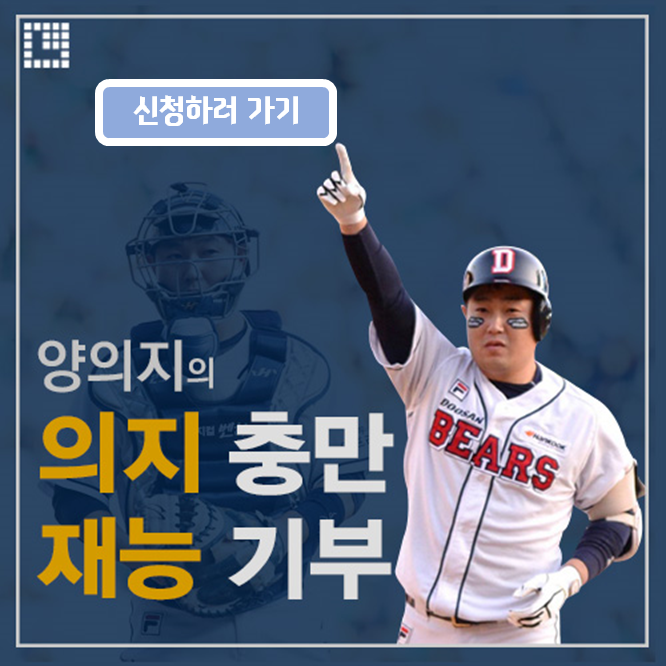